Organised You | Will remote working bring the death of the office?
15217
post-template-default,single,single-post,postid-15217,single-format-standard,ajax_fade,page_not_loaded,,qode_grid_1300,footer_responsive_adv,qode-child-theme-ver-1.0.0,qode-theme-ver-17.2,qode-theme-bridge,qode_header_in_grid,wpb-js-composer js-comp-ver-6.10.0,vc_responsive

Will remote working bring the death of the office? 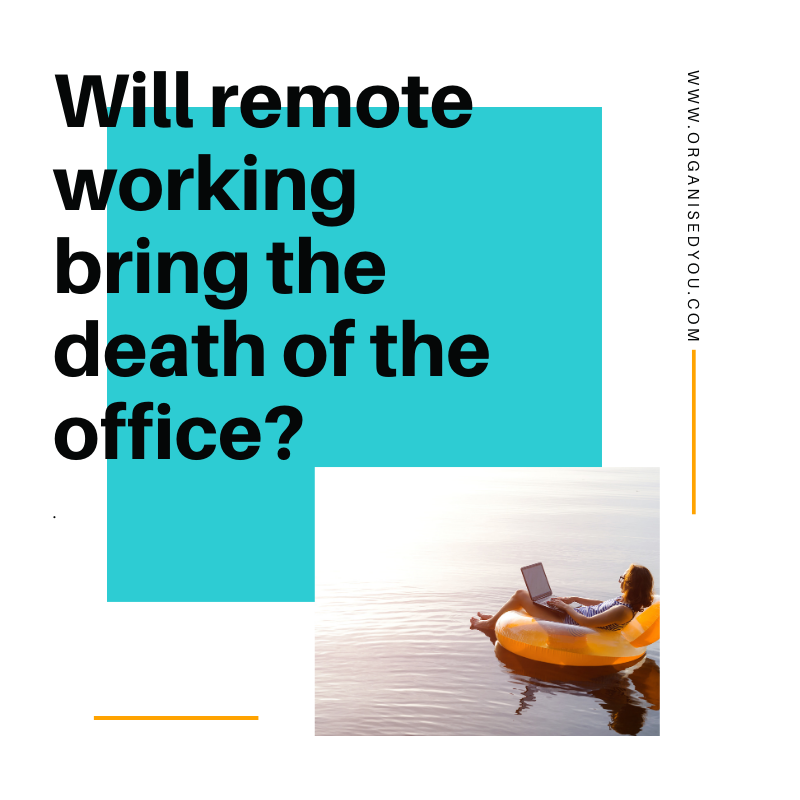 05 Oct Will remote working bring the death of the office?

Posted at 11:47h in Uncategorised by Karlene Rivers

Back in March, none of us could have imagined that the UK workforce would still be stuck in limbo in terms of whether we should stay at home or return to the office. There’s no doubt that some level of remote working will continue over the years – if not decades – to come. But does that really mean that office working is reaching the beginning of the end?

Everywhere you look today, there are statistics, opinions and articles on both sides of the fence. For instance, Spotify is allowing staff to work from home until 2021, while Netflix’s CEO describes remote working as “a pure negative”. Meanwhile, Google’s CEO is looking into a hybrid approach after a recent poll revealed that 62% of the company’s employees wanted to return to the office part-time. Closer to home, I know several of our own clients are debating whether to return to the office. So, let’s take a look at the pros and cons of continuing to work from home in 2020 and beyond.

Time: An obvious advantage for those who live further away from their office is the time saved on commuting each day. Whether a 20-minute drive or a two-hour train ride, any time saved can help ease the working day. It could mean relieving the pressure of the school run, it could mean taking half an hour out to catch up on your favourite magazine, or finally getting around to that niggling DIY job.

Focus: Especially now the kids have gone back to school, it’s easy to turn off any distractions when needed – such as email or instant messages – and really focus on the task in hand. And for teams who need access to the right information at the right time (project/team updates, contacts, client documents etc), there’s a huge – if slightly overwhelming – choice of free or good value tools which can help. Project management software can be great for driving efficiencies and maintaining productivity among remote team members. We love monday.com, but you could also use Asana, Scoro, Trello – the list goes on. If your team engages well via a group chat, there are several Instant Messaging apps such as Slack, Flock, WeChat or Google Hangouts. Even social apps, such as Facebook Messenger and WhatsApp, are increasingly being used in the (virtual) workplace.

Flexibility: In some companies, the traditional office environment equated to standard 9-5 working days, where booking a dentist’s appointment within your set hours would be frowned upon. Thankfully at Organised You, where we are especially mindful of working parents who need to fit their working day around other commitments such as the school run, we promote flexible working hours whether staff are in the office or at home. But for some companies, the forced shift towards remote working this year has also promoted a more flexible culture, where work can be carried out at different times of the day.

Blurred lines: While many of us enjoy the benefits of saving time on the commute, there is often a natural propensity to step into the “office” (by this, we mean walk from the kitchen to the dining room!) earlier in the morning, but also, to carry on a little longer at the end of the working day in order to finish a project. While there’s nothing wrong with putting in the extra hours occasionally, allowing this to become a routine means the lines between work time and downtime start to blur, which can have a significant effect on mental health over time. Therefore, it’s really important to maintain boundaries, which can be achieved by venturing back into the office at regular intervals.

Social barriers: Although some level of remote working can be healthy for us, sustained periods of homeworking can take its toll. Humans are inherently social beings – we crave social interaction with others. What’s more, from a work perspective, real life face-to-face interaction can be great for more organic idea generation. So next time you need to organise a brainstorming session, perhaps try to hold it in the office. According to a recent survey by project management platform, Scoro, most employees admitted they missed seeing their colleagues, whether for social ‘water cooler’ conversations, or for more structured work meetings. As one employee put it, “video calls and online documents are great, but nothing compares to actually being in the same room, bouncing ideas around and working on things together.”

Considering the above arguments for and against, it could be that a more balanced approach to working is the way forward. Here at Organised You, we’ve always believed that flexibility is key. Rather than focussing on the term “remote working”, it might be more realistic to focus on a “work-from-anywhere” approach, instead. Like Google, we’re encouraging a hybrid approach in which we allow staff to come into the office at times that work best for them. In fact, it’s this mutual trust that brings the best out of our team in terms of focus and productivity.