Organised You | Five TED talks you NEED to watch if you run a business
15075
post-template-default,single,single-post,postid-15075,single-format-standard,ajax_fade,page_not_loaded,,qode_grid_1300,footer_responsive_adv,qode-child-theme-ver-1.0.0,qode-theme-ver-17.2,qode-theme-bridge,qode_header_in_grid,wpb-js-composer js-comp-ver-6.10.0,vc_responsive 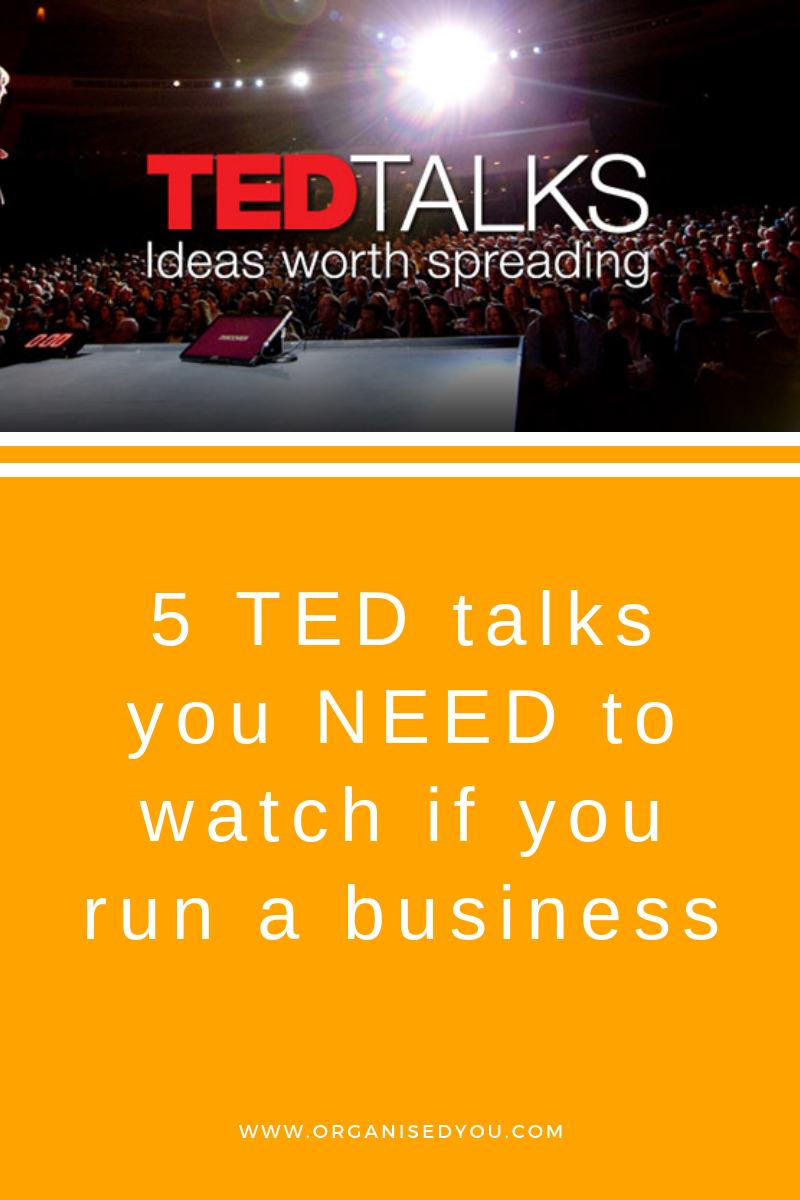 Posted at 12:20h in Uncategorised by Karlene Rivers

Short for ‘technology, entertainment and design’, TED talks are concise yet informative presentations given by a variety of industry experts or other speakers with interesting personalities, which can be summed up by the TED tagline: “ideas worth sharing”. For those of you who aren’t familiar with TED talks, we thought we’d share our top five for you to enjoy during your coffee break.

First up, this is perhaps one of the most inspirational talks we have seen, as well as being the second-most-watched TED talk in history. It’s an insightful session that is definitely worth a watch if you have time. Cuddy starts by describing how even the subtlest body language – or non-verbal communication – can have an enormous impact on the people around you. She goes on to talk about the various conscious and often subconscious ‘power poses’ that people adopt, for example, thrusting your arms above your head in a V shape when you achieve a goal, or raising your chin as a sign of dominance in certain situations (such as an interview or while giving a presentation). So although it’s probably not the best idea to adopt the “V” position midway through a client pitch, strange as it sounds, Cuddy’s top tip is to adopt a power pose for 2 minutes before you enter a stressful or unfamiliar situation. You never know – it could just help you win that client! Being consciously confident is the key here.

In this talk, Pesce describes five ways in which we can scupper our dreams if we’re not careful. In summary, the first is to: ‘believe in overnight success’. In other words, if you read a story about “that tech guy who built a mobile app and sold it for billions”, then there is probably a lot more to the story than first meets the eye, so the moral of the story is to always delve a bit deeper before you believe what you read. Pesce recalls how she applied for MIT two weeks before the deadline and got in just like that – when in reality this followed 17 years of hard work and preparation – taking life and education very seriously. The second way is to ‘believe someone else has the answers for you’. Whether you think a friend, family member colleague or business partner will guide you to business success – you actually need to make those all-important decisions yourself! No else has the answer. The third way is to ‘decide to settle when growth is guaranteed’. When you think you’ve done a good job of growing your business, don’t stop there – instead keep going. “Ok” is never ok. The fourth way is to ‘believe the fault is someone else’s’. Making excuses will not make the problem go away, and the reality is that something along the way must have been your fault, especially if the ultimate responsibility for a project lies with you. And the fifth way… Well, we don’t want to spoil it for you, so you’ll need to watch the video to find out!

This is a quick-witted and humorous narrative on how we tend to distract ourselves from the pain and challenges we’re experiencing by adopting a positive psychology. Achor is an advocate of studying the positives of any given situation rather than the negatives, for example, studying happy people to ascertain why they are happy and what makes them tick, rather than how to make depressed people happier. Most people believe that if they are successful they will become happy, but this is often flawed because when you achieve success, you tend to shift the goal posts further, so you will never achieve your own ‘acceptable’ level of success. By focussing on the negative aspects in life, it’s easy to adopt what Achor refers to as the “medical school syndrome” – i.e. when you read through a list of symptoms and diseases and gradually believe you have them all. It’s not necessarily the reality of the world that shapes us, but the lens that our brain sees the world through that shapes our reality. And if we can change that lens, then perhaps we can change our happiness or even our business outcomes. For Achor’s three tips on how to rewire your brain in 21 days to see things more positively, watch the full video here.

This is a slightly more sober talk but is nonetheless poignant. Slaughter tells of the struggles she faced in her career, not specifically as a woman, but as a working parent in general, when she had to choose between a Government promotion and her children. Equality is about being feministic, but more about striving for equally respected choices for both women and men. Real equality means valuing family as highly as work, regardless of gender. What’s more, workers who have a family to get back to care for will often end up performing their job better as a result. In a global economy, where remote working is becoming more mainstream, flexibility in the workplace is key to higher levels of efficiency and lower levels of stress. Countries such as Norway, Sweden, Denmark, and The Netherlands, whose governments invest in universal childcare, have a much more competitive economy than the rest of the world.

And last but not least, something to really make you smile on your coffee break. If you’ve ever tried to reply to a spam email, you’ll probably be able to relate to this! Veitch tells the story of how he actively engages with spammers, by going along with their stories and building upon them, with hilarious consequences.

So if you need some serious inspiration – or a downright giggle – do check these talks out!